Here are some of nice little creative things I've done over the years. 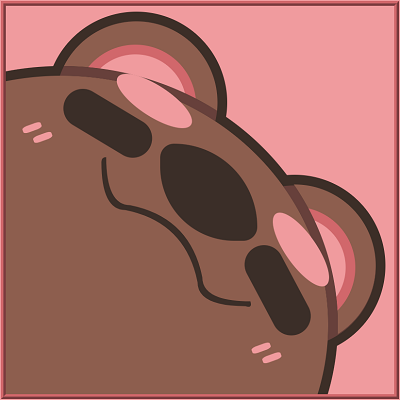 https://darlosworld.co.uk/smilky/
There's a really cool artist on Twitch called Smilkyshake with an absolutely adorable avatar. Recently I'd been playing with CSS styling on CSS Battle, so decided I'd have a crack at recreating his avatar in CSS.

https://www.deviantart.com/toyholiday
Have you ever noticed that when toys go on holiday they have a much better time than we do? 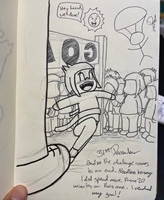 (View on Twitter)
During 2020 I spent at least 20 minutes of every single day drawing something. The result was 366 drawings in 5 books. This may well be the only time I could say that I drew 5 books in a single year.


A computer game that presents a situation where students have to use english (their life depends on it!)

What do you want to be? When I taught English in Japan I often said to my students "I want to be a game designer". Though I didn't really have game designing career aspirations, as a life-long fan of having fun, and as I'd studied a tiny bit of programming before, I did want to have a go at making a game specifically for my students.

In this game, the player moves to a small town in Japan and is due to start at the local junior high school. However on their first day they are somehow transported to a school in the UK, where they were 'expected' as the new exchange student. How they choose to act and how well they use the English language affects their outcome, and possibly their survival.

It's a visual novel style game, a popular style of story based game in Japan. Think of it as similar to the old Choose Your Own adventure books where one simple decision affects the outcome of the whole story. I wrote a total of 20 possible endings, but not all of them are happy.

I tried as much as possible to include things that students I made this game would know something about. The character moves to Hohoku and transfers to the same school as them. The school they are sent to in the UK is my actual old school (something that's come up a few times in classes here), and even the teacher turns out to be their actual real-life homeroom teacher. This town has a lot of windmills, and has twice rejected plans for a nuclear power plant, that kind of information also comes up. I wanted to get the students to also think about their own town, and it also gave me a chance to study a bit about the local area (as well as get some much needed Japanese language practice). At the same time, I've tried to make the English as natural as possible, including one character adding "mate" to the end of most of what he says. As such, there are sections that students just will not understand. This puts them in the same situation as the character. This is not a textbook-based game (despite me using their textbook to ensure they weren't completely in the dark), but I've tried to give them a bit of an experience of England (albeit a VERY tiny one).

I started making this in August (2012), constantly writing during most (if not all) of my free time. My original plan was to have it complete by January so students could play it and answer questions about the story (and earn Hohoku Realms XP), but reality got the better of me and I was able to have it finished in time for my 3rd year junior high students' last English class, three days before their graduation. I also wanted voice acting, and even put out an appeal on a couple of Voice Acting forums. I'm planning an upgraded version so I can add all the things I couldn't.

For the class we used this game in, we put a copy of the game on every other computer in the computer room (students were in pairs) and gave each pair two printouts. The first had 7 questions about the game content, and a space for 20 passwords (when you reach an ending it will show you the ending number, a password and your English Point score). The other sheet was simply called "Strange Japanese" ... as I said, part of the reason I made this was for my own study. The first pair to answer one of the seven questions won a small prize. The first pair to reach an ending received a sticker each. At the end of the class I gave everyone (that wanted one) a copy of the game on CD.

I've made the game available online, with a few changes. The changes are mainly about privacy, the names of the schools are different, the teachers name is different and so on. If you want to use this in your classes, feel free. I'll even send you the worksheet I'd prepared. If you want to try making your own game, it's very easy. The program I used is called Ren'Py, and making a simple game is as easy as writing dialogue. The tutorial is easy to follow