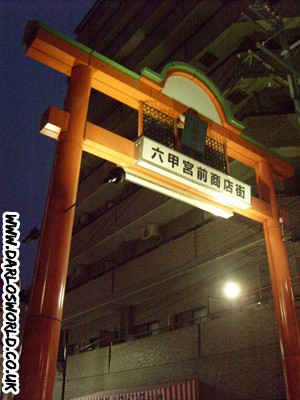 I’ve added another load of photographs from my time in Japan to the blogspot site and still have loads more to come (hundreds, possibly thousands) so be sure to keep checking them out.

Now if you think back my new year’s post I mentioned a very kind woman on a train who gave me and a friend a biscuit and a mandarin orange, and how if that had been England it would have been a very scepticle moment. In fact here’re my very words.

One thing I forgot to write about in the last entry is about the kindness of others here. On the train to get our hair cut, we were sitting across from and elderly woman wearing a facemask. Facemasks are a common sight here as people wear them to either try to stop the spread of any disease they have (or have been in contact with), or to try to help them avoid a common illness going around. As we were leaving the train she tapped me on the arm and held out a mandarin and a biscuit. I couldn’t translate what she said well, but she was giving them to us as a gift. We were stunned and had absolutely no idea why, but this kind of generosity back home would have caused a lot of scepticism.

Well one chap’s taken note of this act of kindness and a lot of other occaisions of people helping people on his own blog, Seeking and Sharing Stories of Kindness and I think it’s a brilliant idea. In a time where people are trying to sue each other for pointless things (I used to work in Claims Direct’s call centre and boy there were a few weird ones), it’s nice to see that there are still people about who are willing to look out for their fellow man. So far he has 6 posts of kind deeds, so if you have a story to add to the (hopefully) ever growing list, do let him know!